Databrawl Fan Ideas Wiki
Register
Don't have an account?
Sign In
Advertisement
in: Made By wowashlynn, Corruptions, Cell Computer, Viruses

Infectruses are a conditional variant of Viruses that usually live in the Cell Computer.

These are the standard class Infectruses.

Standard Infectruses are the same size as standard Bacteriwares and Cellgrams, with the same proportions too. Infectruses have the same body shapes as standard Viruses, but with rounded edges. They are red in color, with strange blue stick things comming out all around their bodies. These blue things have roundish spheres on the end.

Infectruses have the same abilities/weapons that standard Viruses have, but they are weaker.

The blue things that come off of Infectruses are somewhat "sticky" and things can get stuck on them. Usually the Infectruses can controll this.

Infectrus Brawlers are, as the name sugests, the brawler class variants for Infectruses.

Infectrus Brawlers have the same abilities that standard Virus Brawlers do, though they are weaker. 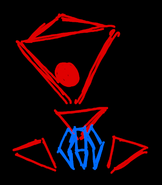 The old design for Infectruses, or at least the standard class, though the others followed the same design aspects.
Community content is available under CC-BY-SA unless otherwise noted.
Advertisement