Databrawl Fan Ideas Wiki
Register
Don't have an account?
Sign In
Advertisement
in: Made By wowashlynn, HeartBleed, Corruptions, Characters

"Heartbleed was a security bug in the OpenSSL cryptography library, which is a widely used implementation of the Transport Layer Security protocol. It was introduced into the software in 2012 and publicly disclosed in April 2014." - Wikipedia

In databrawl terms, HeartBleeds used to be buggy programs that were captured by corruptions, then were turned into one.

HeartBleeds are a blood-red color, with a sphere for a head, a box for the body, and a teardrop like shape for the arms. There's a square hole in its chest that shows it's heart, that has "blood" dripping off of it. They have something that resembles a ghost's "tail" that comes out of the bottom of their torsos. Their eyes are slightly tilted inward, and are not filled in. There's also blood tears coming from the eyes. The eyes are also different sizes. They always look stressed or nervous.

HeartBleeds' fists are pretty weak, their punches would only do about 20-25 or 27 damage per hit.

HeartBleeds can use some of the blood from their hearts as a projectile by turning it into a blob and throwing at their foes, these blobs function similarly to a Software's jelly donut.

HeartBleeds can also pour a big puddle of blood around them that stays there for up to 10 seconds. This puddle damages enemies who touch it, but does nothing to allies.

All HeartBleeds used to be programs that were very buggy. Corruptions took advantage of the bugs and glitches, and used the program(s) in order to infiltrate the security, this also started to corrupt said program(s), and turned them into HeartBleeds. 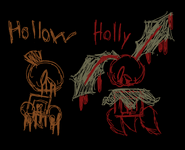 If you want me to make a HeartBleed variant for your computer, comment it down below.

The full version of the HeartBleed image. It shows their emotions.

The original picture of HeartBleed that was drawn on paper. It also shows things like its hight and pictures of its abilities.
Community content is available under CC-BY-SA unless otherwise noted.
Advertisement